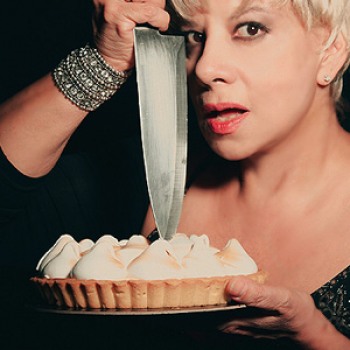 A tragicomedy in two acts. A couple celebrates the 25th anniversary of their wedding. He is an advertiser, she is a violinist. The particularity of the play lies in the fact that in the first part it is only the man who speaks, while the woman speaks during the second part, except for the closing scene, where they both talk for a while. Although they address each other, it is as if they are talking to themselves, as if they are thinking out loud; but the other person cannot answer, even though they are part of the action. In a single room, the truths and lies of a long life unfold, while a peach cake lies on the table, bitter like poison.

In the theatrical play “Peach pie” written by Minas Vintiadis and directed by Manolis Ionas, a rather heretical view on the love-and-hate relationship of a married couple living next door. Or, is this about us? In the roles of the Woman and the Man starring Anna Adrianou and Dimitris Maziotis accordingly.

Minas E. Vintiadis, journalist and author, was born in September 1957, in Port Said, Egypt, raised in his hometown, the island of Kasos, and has been living in Athens ever since he was 16. He studied Journalism at a young age and today, at an older age, he is studying Greek Culture in the Hellenic Open University.

For twenty-seven years, he worked for the Lambrakis Press Group and the newspapers “Vima” (1984) and

“Ta Nea” (1986-2011). He has served as editor, cultural section editor, chief editor of the cultural department, manager of Northern Greece Publishing, manager of the magazine “Taxydromos”, features editor. Today he has a column in the ART section of the newspaper “Pontiki”. For thirty years, he worked with the national radio, the last twenty-five of which he had radio shows related to culture in the Third Program of the Hellenic Broadcasting Corporation. His published work includes the novels “What I Told Claudia” (1996, Livani Publishing Organization), “The Three Marias” (1999, Livani Publishing Organization), “God’s Right Foot” (2004) and “Do They Fry Potatoes on Mars?” (2013, Topos Books) and the short stories collection “The Dragon Rooster” (2006, Ellinika Grammata). His work has been included in many short story collections (Kedros Publishing, Metaichmio Publications) and he has been published in all major literary magazines (Lexi, Dentro, Entefktirio, Exopolis, etc.). Some of his short stories have been translated to German.

He is a member of the Arts Committee of the Michael Cacoyannis Foundation, a member of the Administrative Board of the Association for the Building of the Opera House and the Academy of Lyric Arts “Maria Callas”. He is an executive member of the “Scholeion” foundation of Irene Papas, while in the past, he has served as a Consultant –for three years– for the Cultural Foundation of the Journalists' Union of Athens Daily Newspapers.

He has taught Creative Writing seminars, and for three years, he taught children with special needs in Iraklio, Attica. In 2015, he taught in the Playwriting Studio of the National Theatre of Greece. His play “Lower Parthenon” was staged in October 2015 in the National Theatre of Northern Greece, directed by Periklis Hoursoglou, while his play “Tattooland” is set for a premiere at the “Aggelon Vima” Theatre as part of the Greek Play Festival, directed by Kerasia Samara, in 2017.

Manolis Ionas is a theatre director and actor.

Anna Adrianou is a Greek actress, screenwriter, writer, radio producer and tv hostess. She was born and raised in Athens in 1953. After graduating from school, she decided to study acting (following her father’s example), at the National Theatre School of Drama.

Her acting career started in the 1970s, starring in television, in cinema and in theatrical productions. Her debut in television was at the tv series “Anysicha niata” (1973), playing the role of Louisa, while at the same time she has her cinema deput at the movie “Asterismos tis Parthenou”. Several other roles in tv series followed, among which the tv series “Skoteines dynameis” (1976), “O dromos” and “To imerologio enos thyrorou” (1979).

During the 1980s, Anna Adrianou worked as a radio producer, while starring in five movies. In 1989 she was the tv hostess of the tv production “Oi 5 thaumastoi synergates mou”, presented in ET2. In 1990 she started her screenwriting career in tv series and productions, while in the same year she was a member of the screen writing team of the movie “I nychta ton magon” directed by Nikos Foskolos (starring Aliki Vougiouklaki). In 1992 she was the tv hostess of the info tv production “Living: The art of life” (Channel Sexen X). During the season 1992-1993 she wrote the script of the tv series “Oi filenades” in (ANT1 channel) and in 1995 she worte the script for the drama movie “Transzito”, in which movie she also was the protagonist.

Dimitris Maziotis was born and raised in Athens. He studied at the Iasmos School of Drama – Vasilis Diamantopoulos (2007-2010) and at the Acting Workshop by the NAMA ensemble – Epi Kolono Theatre (Teaching: Eleni Skoti): “improvisation” on acting and logos -method acting, –introduction on some neutral texts, –a seminar on techniques of automatic improvisation-archetypes (four years).