Nikos Papadogiorgos: The Art of Song 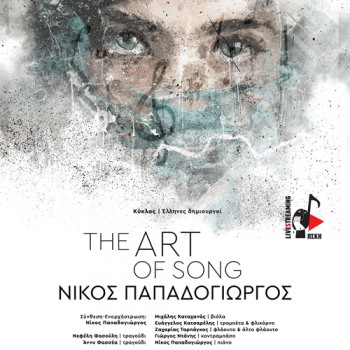 Prominent, bright and highly prolific, the Greek composer, orchestrator and pianist Nikos Papadogiorgos presents selected songs of his latest compositional period that expands over the past eight years and focuses on the musical form of art song.

In his concert “The Art of Song”, Nikos Papadogiorgos collaborates with an ensemble of charismatic musicians, researching on stage the multifaceted creative process of setting Greek poetry into music, combining the idiosyncratic character of the Greek and the Mediterranean music traditions to the harmonic depth of the Western-European music (classic music, Jazz). In addition, the composer sets into music a selection of English poetry of the period 1850-1950, achieving therefore a coalescence of diverse elements and influences forming the personal aesthetics of the Greek artist.

«Aiming to describe the aforementioned compositional material, the term “vocal chamber music” would stand rather characteristic and accurate» describes the composer. On the stage of the “Andreas and Maria Kalokairinou” Hall of the Cultural and Conference Center of Heraklion, CCCC, Nikos Papadogiorgos performs alongside with the exceptional singers Nefeli Fasouli and Annie Fassea, as well as Michalis Katachanas (viola), Dimitra Chanialaki (trumpet and flugelhorn), Zach Tarpagos (flute & alto flute) and Yorgos Danis (contrabass).

Nikos Papadogiorgos: The fairytale of light | Lyrics by Stavros Stavridis

Nikos Papadogiorgos: The other side of the mirror | Poetry by Mary Elizabeth Coleridge (1861-1907)

Nikos Papadogiorgos: Psalm 133 | From the Book of Psalms. Composed in Hebrew by King David, translated into French (in poetic form) by Théodore de Bèze (1519-1605) and rendered into modern French by Marc-François Gonin (1921-2004)

Nikos Papadogiorgos: Just for a moment | Poetry by Anthi Mitropetrou

Nikos Papadogiorgos: Singing for the sea | Poetry by Anthi Mitropetrou 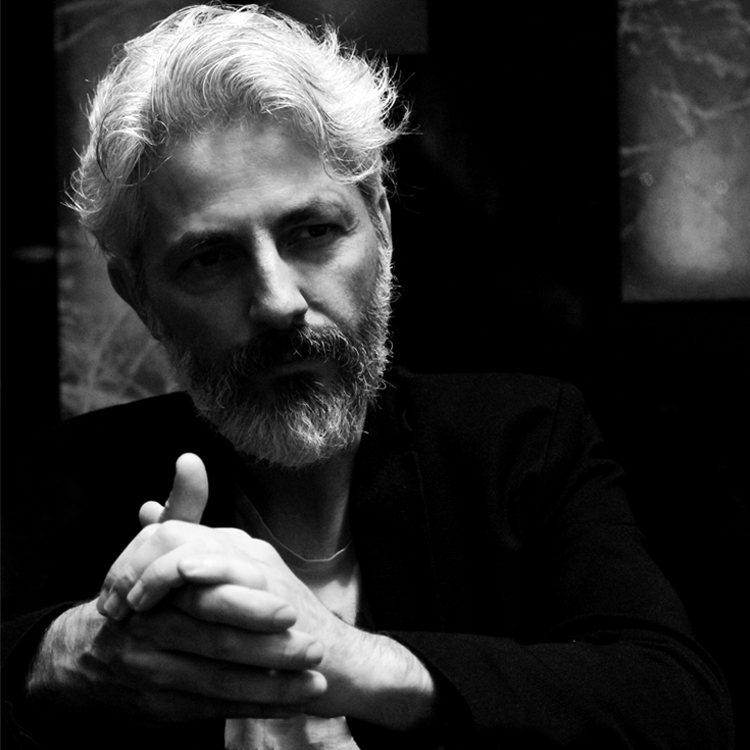 Throughout the years he has composed music for documentaries, theater, short films, important public events, corporate videos, TV spots, audio theater CDs, CDs accompanying children’s books, works for piano and more. In 2012 he started focusing on setting poetry and lyrics to music and in December 2013 he won the 2nd prize at the most prestigious Greek songwriting competition. In his songwriting he has been working in depth on bringing together the, inherent in him, Greek and, more broadly, Mediterranean melodic tradition, with the harmonic vocabulary and structure of the Western European music (both classical and jazz). The first fruit of this work of his was the release, in 2017, of the studio album entitled “Staurodromi” (Crossroads) with songs interpreted by several well-known Greek singers.

In 2015 and 2016 he was invited by the Onassis Cultural Center to compose music for the projects entitled “Young composers set to music Greek poetry” and “Turning world's myths into songs - a story with shadows and sounds”, while his songs became the inspiration for the creation of the musical-theatrical plays “16 Mirrors” and “The Beginning without the End”, which were presented at Michalis Kakogiannis Foundation (May 2016 and January 2017). As an orchestrator he has cooperated with the Contemporary Music Orchestra and the National Symphonic Orchestra of the Hellenic Broadcasting Corporation, with various smaller ensembles as well as several songwriters who entrusted to him the orchestration of their songs.

In September 2020 he recorded a selection of his compositions for the Hellenic Broadcasting Corporation, after an invitation of the artistic director of the ERT Contemporary Music Orchestra, Mr. George Aravidis. During the last years he has been focusing on setting to music English and Greek poetry of the period 1850-1950 (T. S. Eliot, W. B. Yates, G. M. Hopkins, G. Mistral, G. Vizyinos et al.). 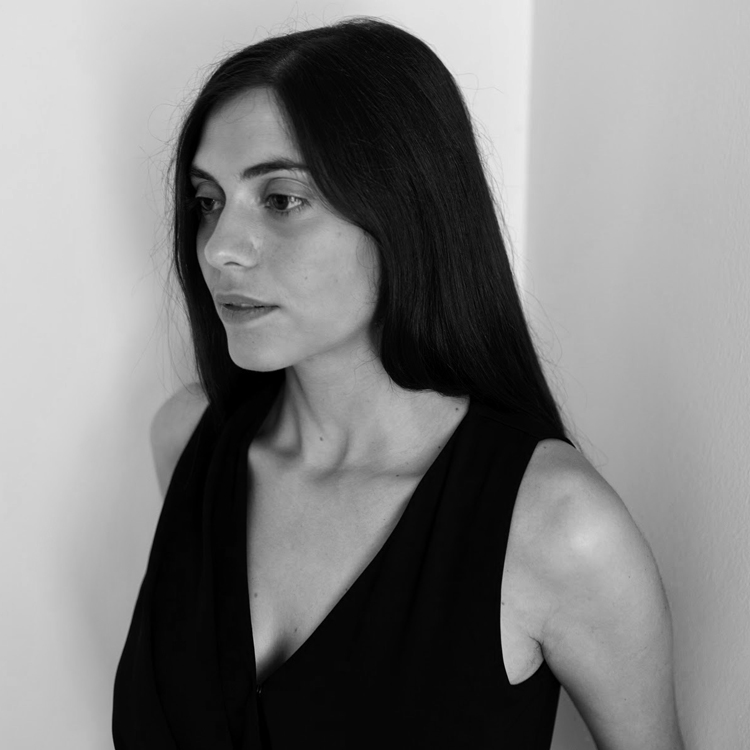 She is a permanent member of Foivos Delivorias’ band, touring around Greece and Europe. She has also worked with Panagiotis Kalantzopoulos’ and Nikos Platyrrachos’ discography. 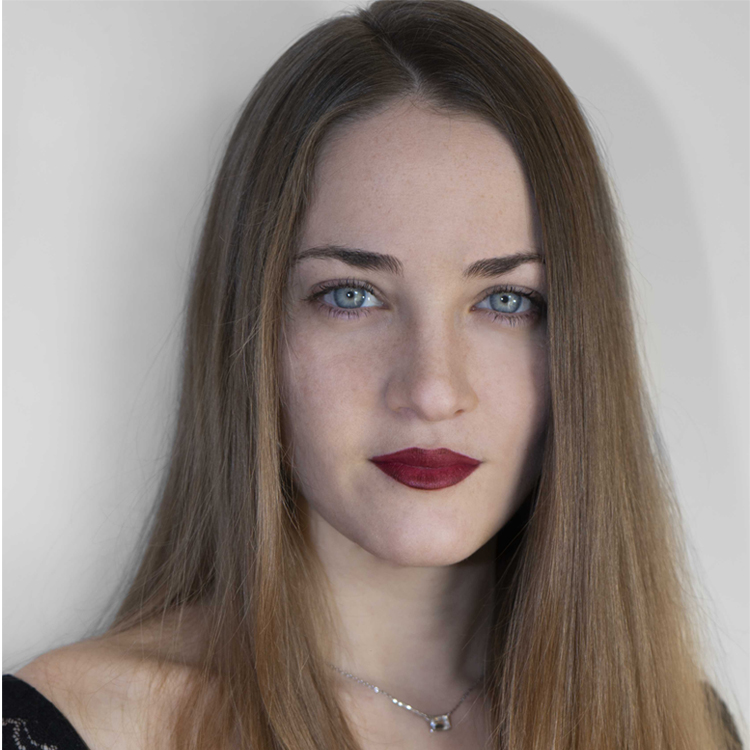 In 2019, she made her debut at the Greek National Opera, performing the role of Barbarina (Le Nozze di Figaro). She has also performed the roles of Nora (Riders to the Sea, by Vaughan Williams), Virginia (Raven Revisited by Kostis Kritsotakis) and Papagena (Die Zauberflöte).

She has sung the part of Olympia (Les Contes d'Hoffmann) in concert, and has appeared at the Grand Prospect Hall in New York, the Athens Concert Hall, the GNO alternative stage at the SNFCC, the Athens National Garden, and in various summer festivals and concerts in Greece. Since the beginning of 2019 she has been collaborating with composer Nikos Papadogiorgos, recording and performing his "art song series". She was also a member of the a cappella group “8tetto”, 2016-2018.

During the 2017-2018 season, she was accepted at the young artists program “The Youth Opera”, at the Greek National Opera. She has participated in masterclasses by Dagmar Schellenberger, Dimitri Kavrakos, Aris Christofelli, Christos Marinos, Irini Tsirakidou and others, as well as at the Royal Conservatoire of Scotland. Annie studied opera singing at the Athenaeum Conservatory, with Christina Giannakopoulou, graduating in 2017 with distinction, first prize and an award for outstanding performance. She is also a graduate of the TEI in Athens, where she studied Oenology and Beverage Technology. 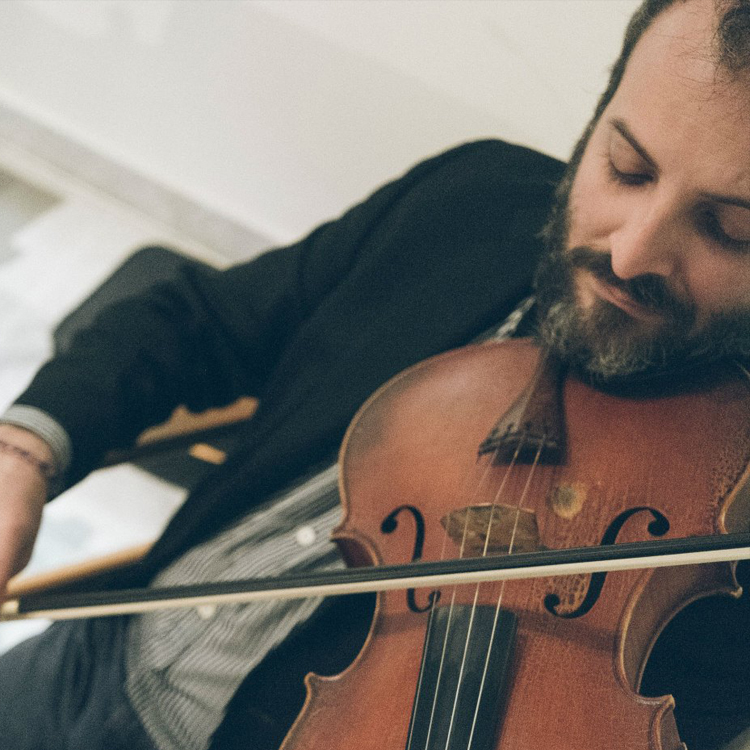 Michalis Katachanas was born in Piraeus in 1979. He is a violist improviser supporting different musical genres - Jazz, Contemporary, Traditional Greek, Classical - composer and educator. At the age of eight he took his first classical violin lessons from Kostas Kavakos. He graduated from the Experimental Music Highschool of Pallini. He holds a Bachelor degree in Music from the Ionian University (GR) under the supervision of Dimos Dimitriadis and a Masters Degree in Contemporary Improvisation from the New England Conservatory in Boston (USA), after receiving a scholarship from the Fulbright Foundation. He has been a student of Charlie Banakos and Ran Blake.

As a professional musician, he has collaborated with various composers and musicians, among others, Jackie Leven, Antony Coleman, Joe Morris, Nikos Xydakis, Nikos Papadogiorgos, Theodor Mirisclavos, Mimis Plessas and as a composer, he has created Michalis Katachanas Quartet which is inspired by the sound of modern European jazz in combination with the Mediterranean and Balkans music. He also composes and plays music for the theater. He has participated in numerous concerts and festivals and presented his work in diverse venues worldwide.

He has recorded two personal albums: Murderess and The Third Duty and participated as a sideman in many recordings in Greece and abroad. Since 2014, he is a faculty teacher at the Jazz Department of the Athens Conservatoire. He has also worked as a music teacher in public elementary schools in Athens, shaping his own pedagogical method of conducting a modern children’s chorus and improvising by producing on the spot impressive soundscapes, using sounds from nature and everyday life. Since October 2018, he has been collaborating with Stavros Niarchos Foundation Cultural Center and the Greek National Opera, in the context of the Stavros Niarchos Park public educational programs. 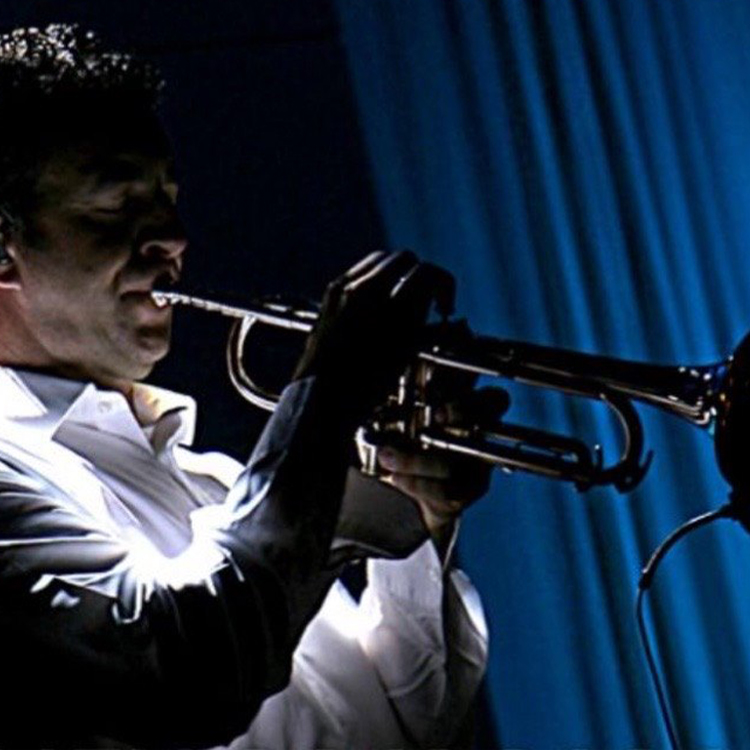 Evangelos Katsarelis holds a diploma in classical trumpet from the Orfeio Conservatory (2003), he is a member of the Big Band of the Municipality of Athens since 2001 and as a trumpet performer he has collaborated both in live performances and on record with well-known artists of the Greek music scene. 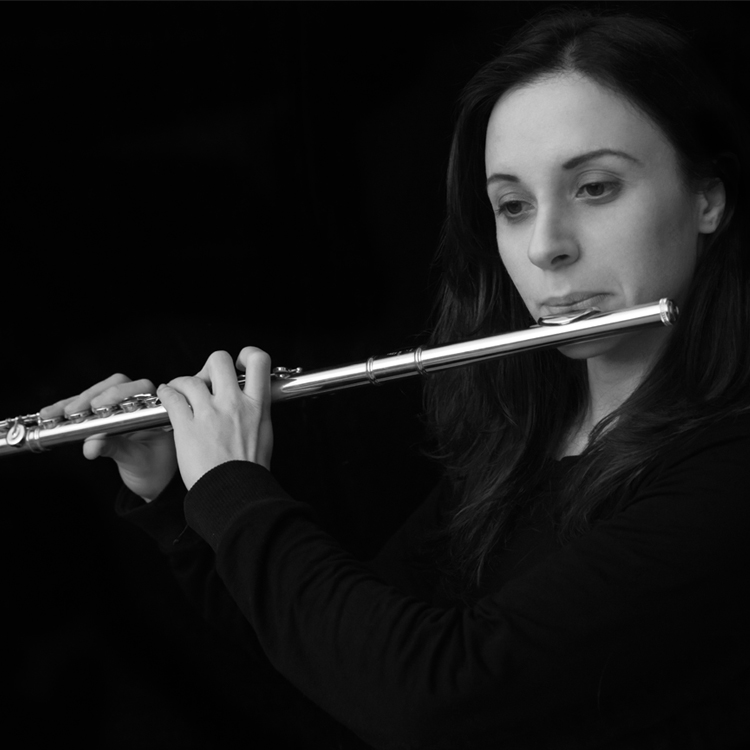 Dimitra Chanialaki was born in Athens, Greece. She studied music at the Athens Conservatory and graduated 2006 with Flute Diploma. She has attended flute masterclasses with Carlo Jans, Peter-Lukas Graf, Liisa Ruoho and Lorent Kovacs. She collaborates regularly with orchestras and chamber music ensembles in concerts, plays and recordings. She has collaborated with the Greek Radio Symphony Orchestra, the Athens State Orchestra, the Greek National Opera Orchestra, the Camerata/Armonia Atenea, the Athens Philharmonia and the Academica Athens Orchestra.

In 2014-15 she was a member of the Educational Programmes Orchestra of the Greek National Opera. Since 2017, Dimitra Chanialaki cooperates regularly with the Athens Philharmonia Orchestra, and she teaches flute at the Athens Conservatory since 2012. 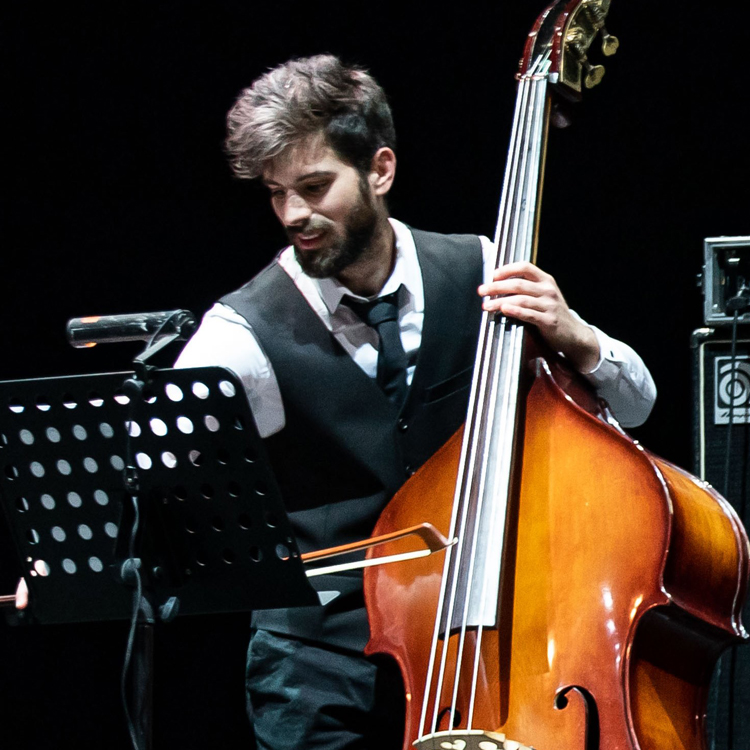 He participated in various masterclasses with both classical double bassists and educators such as Quirijin van Regteren Altena and Eugenios Politis and jazz masters like Lee Konitz, Adam Nussbaum, Ralph Peterson, Andy Middleton as well as with local jazz performers.

Since 2012 he is working as a professional musician with several groups in a wide variety of music styles such as jazz, soul, funk, blues, pop and continues until now as an active member of the greek jazz community. He also has been member in Greek Youth Symphony Orchestra, SEYO European symphony orchestra and Sinfonietta Hellenica.