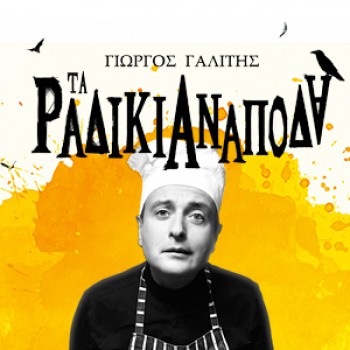 21:00, Atrium Space of Cultural Conference Center of Heraklion.
The play "Six feet under" is a comedy with thirteen roles written and interpreted by George Galitis. It is a black comedy with thirteen comic funerals that satirize recognizable faces and situations with a lot of humor.
A selfish politician, a very very very rich shipowner’s widow, a surgeon who is a friend but above all, a scientist, the classical singer Chloe Miroloi, a thief, a general, a cook and Death himself, are some of his thirteen faces of the project.

The play "Six feet under" premiered on Tuesday and March 13th on 2012, was much loved by the public and critics and continues its course for nine years in theaters throughout Greece.

Advance ticket sales | 12 & 8 €
The pre-sale has started. You can get your ticket here.

Giorgos Galitis
Giorgos Galitis was born on May 2th, 1970 in Thessaloniki and grew up in Naoussa, Greece. From 1983, he participated in performances of amateur troupes in the city, while at the same time he published political cartoons in local newspapers and magazines. He studied at the School of the National Theater. As a student at the National Theater, he wrote and directed the reviews "Opera of Antara" (1993) and "Ridiculous Place" (1994), which were presented at the school theater.
His first professional appearance was in Z. Faydo's play, "Ladies Tailor" (in the role of servant Etienne), in 1994. Theatrical performances followed: "Bam and Kato" (Thomas), "In The Hague and in the evening" (Various Roles), "The Locandiera" (Marquis Forlipopoli), "Bravo Doctor" (Policeman Bill Connolly), "Zipper" (George Bradt), "Makrykostaioi and Kontogiorgides" (Thomas Makryfostas), Roles), "The Idiots" (Count Juzekevic), "The Broken Pitcher" (Counsel Walter), "Tarantella-Inner Voices" (Carlo Saporito), "Thesmophoriazouses" (Slave), "The Inspector" (Judge Liapkin Tiapkin), "Calatrava me and let me cry" (Various Roles), "Little Pharisees" (Aristides Unfortunate), "Peace" (Together with Hermes), Ben Clark), "Wealth" (Wealth), "The Aunt from Chicago" (Takis Zerigas), "Patris … Examartein" (Various Roles), "Dad, do not die again Friday" (Lefteris Tsiapouras), Medea -Bost ”(Trofos),“ O Bakalogatos ”(Kitsaras),“ Lie to Lie ”(Most Reverend Sandy),“ Peace ”(2nd Slave, War),“ Six feet under ”(13 Roles),“ What House Will you deliver, baby ”? (Various Roles), "Omerta: the silence of men" (Simos), "You wake up the show inside me" (Various Roles), "Mermaids and Mages" (Costas or Flu), "The Death of Ivan Ilyich" (Ivan Ilyich and Various Roles), "Life After Low Flights" (Dad Sparrow, Angel), "Peer Gud" of Egstad, King of the Trolls), "Alas for the young" (Andreas), "Clearchus, Marina and the short" (Machos).
He participated in TV series and shows. He has collaborated as a writer in theater and television. His collaborations in cinema concern the productions: "The Elevator", "One Day at Night", "The Absolute Moment", "Thursday and 12", "Charlie". His books: "Lives of Ridicule - The works and the filth", "Patriotism or Nothing is to be apologized for anymore", and "Six feet under".

Vladimiros Kyriakidis
Vladimiros Kyriakidis is an actor and director. He was born on June 26th, 1962 in Thessaloniki. He made his film debut in 1982 with the film "Summer Lovers", while he made his first directorial attempt in 2006, in collaboration with Efi Mouriki, in the film "Straight Story", in which he also wrote the screenplay. He has participated in some of the most famous Greek productions in cinema. He started in the theater in the early 1980s, collaborating with well-known directors and performing in popular troupes. Later he started directing and starring at the same time. It started on television in the early 1990s, with numerous appearances in Greek series to this day ("Do not start mumbling", 2013).
Examples of his work in the theater are, among others, the performances: "Summer Night Dream" (2019), "Matilda" (2018), "Six feet under" (2017), "Strange couple" (2017).

Tolis Ketselidis
Tolis Ketselidis was born in Belgium, where he studied sound recording and electronic music at the Royal Conservatory of Brussels, while working as a sound engineer and musician on the local stage. He has owned the recording studio Libra since 1990. In addition to his record activities that have given him golden records as a composer and orchestrator, he has composed music for many series on television, as well as for many performances and reviews in the great Athenian theaters.