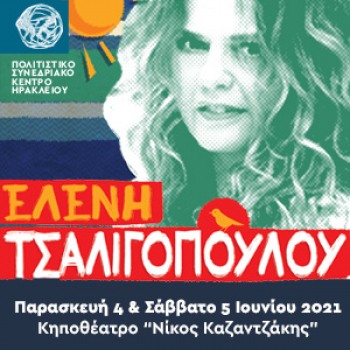 In the first open-air concert of the Culture Conference Center of Heraklion summer concert and performance series of 2021, the Greek performer Eleni Tsaligopoulou presents a music program comprising selected beloved and well-known songs from her personal discography and from the rich Greek music tradition; rebetika, traditional songs from the Greek mainland and the islands, as well as songs by Manos Hatjidakis, Mikis Theodorakis and Manos Loizos, rebetika by Vasilis Tsitsanis, Apostolos Kaldaras, Giorgos Zambetas, Manolis Chiotis et.al., and also songs introduced for the first time to the public by Eleni’s voice.
Join us to an extraordinary mixture of songs representing Greek music, in a concert given by one of the most beloved and eminent Greek performers.

Advance ticket sales | 15 & 8€
The pre-sale has started. You can get your ticket here.

Eleni Tsaligopoulou is a Greek singer and composer whose presence has marked the popular/ethnic Greek song scene over the past 30 years. Eleni cannot be confined within a genre – she is just as comfortable with western pop style songs as she is with ethnic music and enjoys experimenting with traditional forms, blending styles and rhythms. She recently joined up with Boğaz musique, forming a creative group that does not hesitate to tamper with existing music forms, bridging the old with the new and western with eastern sounds. Eleni’s discography and concerts include collaborations with some of the most important composers and singers of Greek song, including Manos Hadjidakis, Yiorgos Andreou, Nikos Portokaloglou and Kostas Kaldaras.