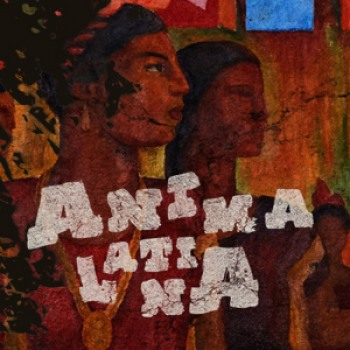 Anima Latina is the soul filled with emotions full of passion and intensity. This soul speaks unknown words of another language, carrying though familiar images. Traditional songs from Mexico, Argentina, Brazil and Italy and songs which are prominent examples of the contemporary oral tradition, reveal the universal emotion of the human soul across the seas. Hymns to the struggle of everyday life, songs of love, melodies of loss, social revolution and the grace of youth.

Amara Me / Scura maje (Poor me / The lament of a widow)

Para ver as meninas (To see the girls)

Maria Kritsotaki was born in Heraklion, Crete and grew up in a musical environment with strong artistic influences, as her parents are music teachers. At the age of 8 she started her studies on the classical violin, and by the age of 6 she was already a member of the Children’s and Youth Choir of The Municipality of Heraklion.

In Athens, she graduated from the Athens University of Economics, along with her studies on contemporary singing with Elly Paspala, at Philippos Nakas Conservatory, on Jazz singing with Lucia Paleologou and on classical singing with Christina Giannakopoulou, at Athenaeum Conservatory. In Holland, Maria completed her Bachelor Studies in Jazz Music, major in Voice, at the "Prince Claus Conservatoire" with the great the teachers Jd Walter, Floor van Zutphen, Francien van Tuinen, Renske Taminiau, Ruben Hein, Deborah J. Carter, and on 2017 she got selected by the Dutch National Voice Teacher Association (NVZ) to represent Holland at the (ICVT) “International Congress of Voice Teachers” in Stockholm and be part of the “Young Professionals Programme”, organized by EVTA, “European Voice Teachers Association”.

During her studies, Maria had the chance to participate in masterclasses by important musicians of the New York Jazz scene, such as Jd Walter, Deborah Brown, Jonathan Kreisberg, Matt Wilson και Gene Jackson. Maria, having sung in a variety of stages and festivals in Holland, Greece and Italy, participates in musical productions mainly in the field of Jazz and Free Improvisation Music with influences of traditional world music and avant garde performances in free improvised settings. Projects she has performed: “The Music Of Crete Revisited”, “Rabbit’s Eye”, “The Word We Live In”, “Helianthus” and is a founding member of the free improvisation initiative “Free The Soprano Player” that performs in Heraklion Crete and organizes the “Freedom Day Jazz Festival”.

In the last few years Maria has also performed at the theatrical productions “Κωλάζ” and “Sweet Vowels with French fries” as an actress, composer and sound artist. Parallely to her artistic career, she teaches singing in Heraklion, in Crete.

Dimitris Neonakis was born in Athens in 1981. At the age of fifteen years old, he started playing the guitar and studying with Akis Tourkogiorgis and Makes Ablianitis while also studying Cretan lute with Giannis Xyloyris. He is a founding member of the Outward Bound trio, and together they have released two albums Outward Bound (Triple Bath), The Path (Slam productions), while their third album with the collaboration of Ronan Guilfoyle is to be released later this year.

Alongside with his work with the trio he has released a solo album called “Lithino” and with guitarist Socrates Vakirtzian the album “The Eagle and the snake”. A member of the Free the soprano player artist collective, created in Heraklion, Crete, in February 2017. The group's activities include improvised musical performances, as well as collaborative ventures between musicians and visual artists, dancers, actors and other artists. Alongside a group of programmers and musicians they have designed and developed three mobile Applications, Genius Jamtracks, PitchBop and Genius Clicks, that early on found their place in the market for music education tools among musicians.

Michalis Avlonitis was born in Corfu and he got into music at the age of seven, playing the piano and the classical guitar. Michalis graduated from the Music High School of Corfu and he has studied Classical Harmony at the Filippos Nakas Conservatory with Evaggelos Kokkoris. As a professional musician, for twenty years already, he has played in multiple concerts from Folk to Jazz Music and he has participated in seminars for Gospel Drumming, Jazz Arranging and Music Therapy. The last years he works mainly as a bass player while he has participated in seminars by respectable instrumentalists such as Kiourtsoglou, Andreou, Hatzigeorgiou and more. Michalis’s main interest lies on learning and understanding the musical idioms from all around the world, as well as their embodiment at the contemporary music, with the required respect to the aesthetics of the tradition.