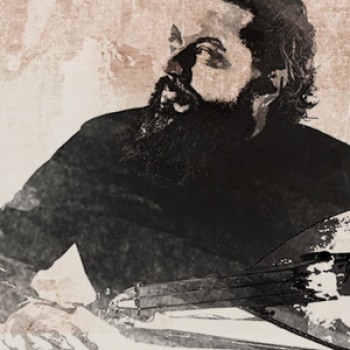 A restless composer, brought up and inspired strongly by the oral music traditions, Giorgos Nikiforos Zervakis presents a concert focusing on experimentation with the contemporary musical forms and selected folksongs, achieving and acquiring thereby his personal composition style. 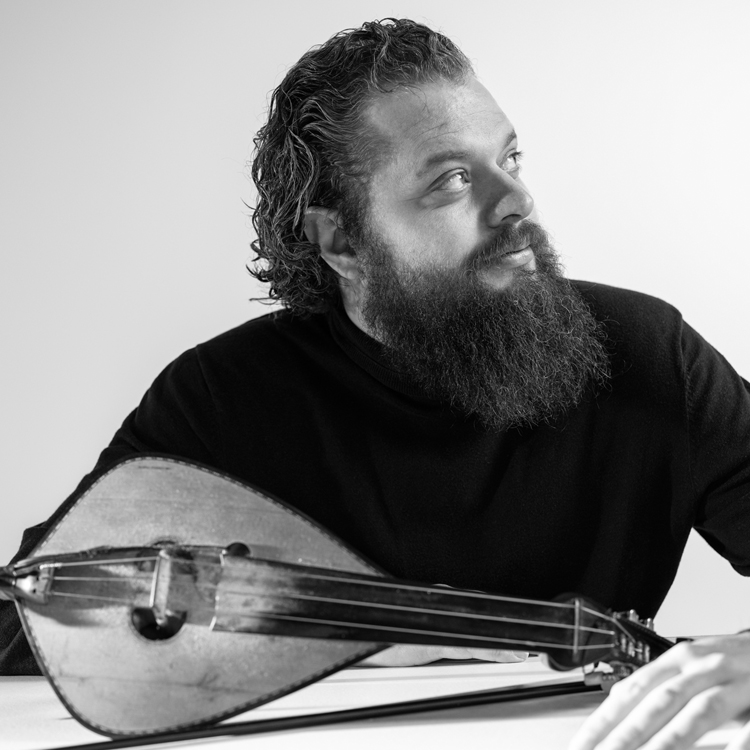 Giorgos Nikiforou Zervakis was born and raised in Messara in Crete, Greece. He studied and graduated from the School Of Agriculture, Food and Nutrition in Heraklion, Crete. He was taught the traditional music of Crete from an early age. Today Giorgos Nikiforou Zervakis writes his own lyrics, he composes songs and he is playing the Cretan lyra, the guitar, the mandolin and the lute. Inspired by tradition, he is experimenting musically using and expanding several music forms, shaping a musical style of his own.

He has participated in several music festival in Germany, Belgium, Cyprus and Greece and so far, he has completed three personal albums (Cheimona ferneis (You bring the winter), Faistos Records 2005 – Mosaiko (Mosaic), En eho Records 2014 and Kritikos Orizontas (Cretan Horizon), Feelgood Record 2016). In August 2015 he collaborated with Leonidas Mpalafas and director Thodoris Papadoulakis on the creation of the song “Na statho sta podia mou” (To stand on my feet), inspired by the political situation in Greece. The song was very well received by the public, describing the struggle in contemporary Greek society while the country being entagled to a series of economic adjustments programmes (memorandums).  In March 2016 Giorgos Nikiforou Zervakis was invited to perform “Kritikos Orizontas” (Cretan Horizon), a nine-songs circle by Giannis Markopoulos, while he was also participating in Giannis’ Markopoulos tour around Greece with the vocal ensemble Libro Coro and the Palintonos Harmonia orchestra. In December 2017, he was the music editor and the composer in the album “Kehribari kai Zafeiri” (Seistron Records 2017) by Vasilis Skoulas. For the most of the songs of this album, Giorgos Nikiforou Zervakis wrote the lyrics too.

One of the most important moment of his musical career for Giorgos Nikiforou Zervakis was the magnificent conecert at the ceremonial lighting of the flame, in ancient Olympia, for the Rio Olympics, in Brazil. He has participated in numerous recordings either writing the lyrics, composing songs or singing and performing the Cretan lyra. 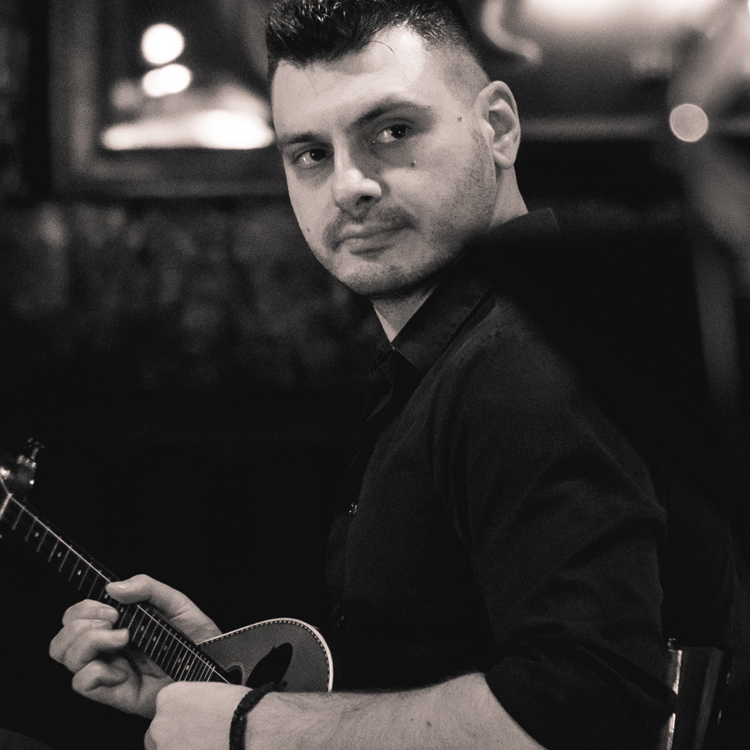 Michalis Pachakis was born in Heraklion, Crete in 1986, originating from Messara in Heraklion. He started studying music at the age of eight years old, having already had acquired a rich musical background from his family and mostly, from his fathers, Athanasios Pachakis, a musician himself.

At first, Michalis Pachakis played the bouzouki, whereas later, at the age of eleven years old, he started playing the lute wherefrom he continued learning to play several other string traditional instruments, such as the mandolin, the oude, tzouras, as well as the guitar, the bass etc. Professionally he played for the first time as a musician when he was twelve years old and never stopped working as a professional musician ever since.

He has collaborated with numerous remarkable musicians of traditional music, and other professional ones, recording together, composing and editing the instrumentation for the recording productions of others, which for feeling fortunate and blessed. As part of his musical and artistic collaborations, Michalis Pachakis has travelled abroad (USA, Australia), performing for communities of the Greek expatriates, while for the last five years he has formed an ensemble which for he is feeling particularly lucky to be gifted with an exceptional chemistry in the musical bonds connecting himself to the other musicians of the ensemble. 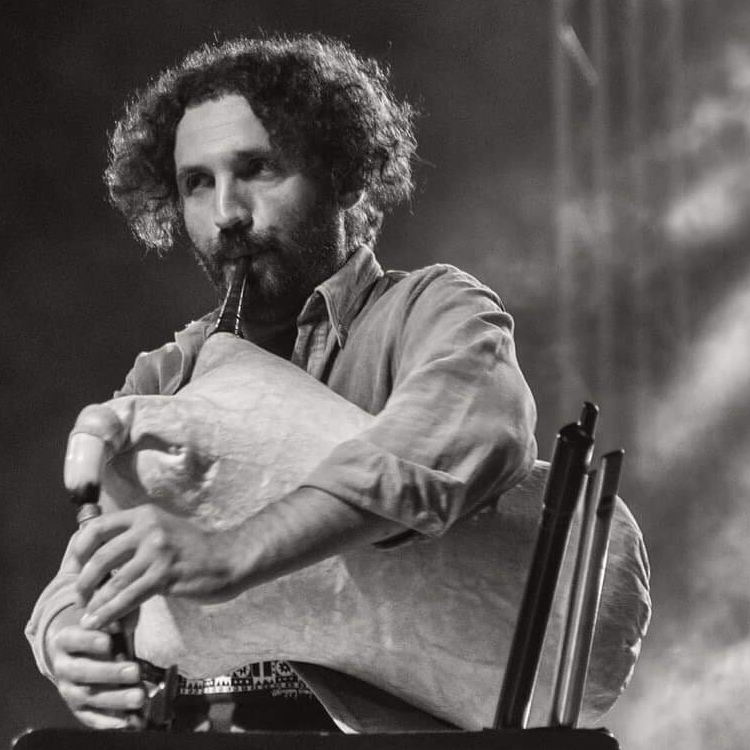 Alexandros Kanakakis was born in Heraklion, Crete, where at he is currently living. Ο Αλέξανδρος Κανακάκης γεννήθηκε και ζει στο Ηράκλειο της Κρήτης. A professional tour-guide, graduated from the School of TourGuides of OTEK, Alexandros Kankakis has been playing music since he was a child, studying the piano, the guitar and the clarinet. As a professional musician he started playing with his father, Michalis Kanakakis, at the age of fifteen years old. Since then, his musical collaborations include some of the most charismatic musicians focusing on the traditional music, such as Kostis Avyssinos, Vasilis Stavrakakis., Giorgos Xylouris (Psarogiorgis), Giorgos Mavromanolakis (Mavros), and many others. 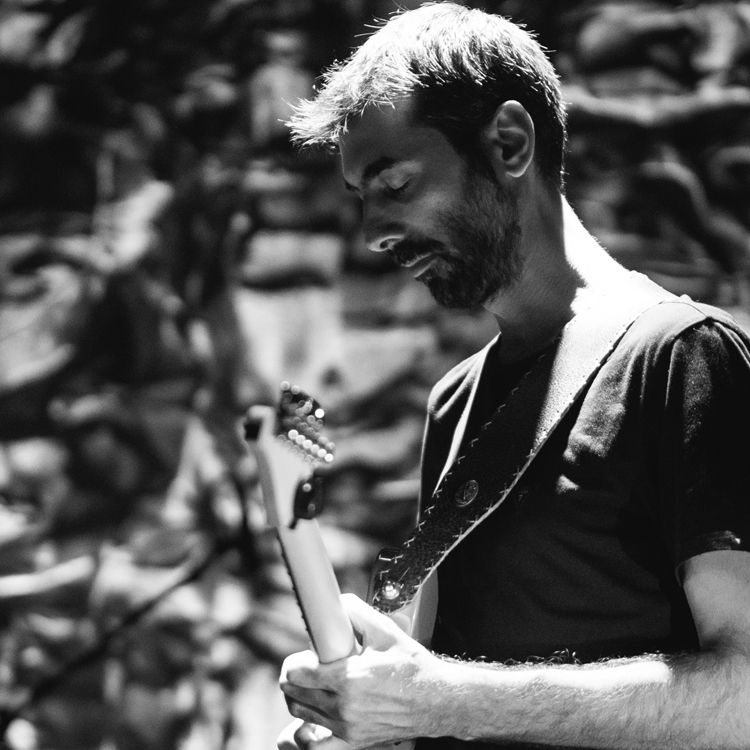 Dimitris Neonakis was born in Athens in 1981. At the age of fifteen years old, he stared playing the guitar. He studied theory of music and guitar with Akis Tourkogiorgis and Makis Amblianitis. Inspired by the blues, rock music and jazz music, Dimitris Neonakis connects his guitar performances mostly with the improvisation. While studying the guitar and the repertory of the West-European music, he was involved with the traditional music of Crete, having music lessons (traditional lute) with Giannis Xylouris. In June 2009, he released the album "Outward bound", in collaboration with the Outward bound band (Triple Bath Records, 2009) and in November 2010, followed another album release, entitled “The path” by the Slam Records (2010). In March 2011, “Lithino”, his first personal album was released by the Notias Records.

Dimitris Neonakis has participated in the album “Para-phrases” by composer Vaggelis Katsoulis, as well as at the «Clinical jazz» collective by the online recording production Clinical Archives, based in Moscow, Russia.  He  is currently teaching guitar at School of Heraklion in Crete. 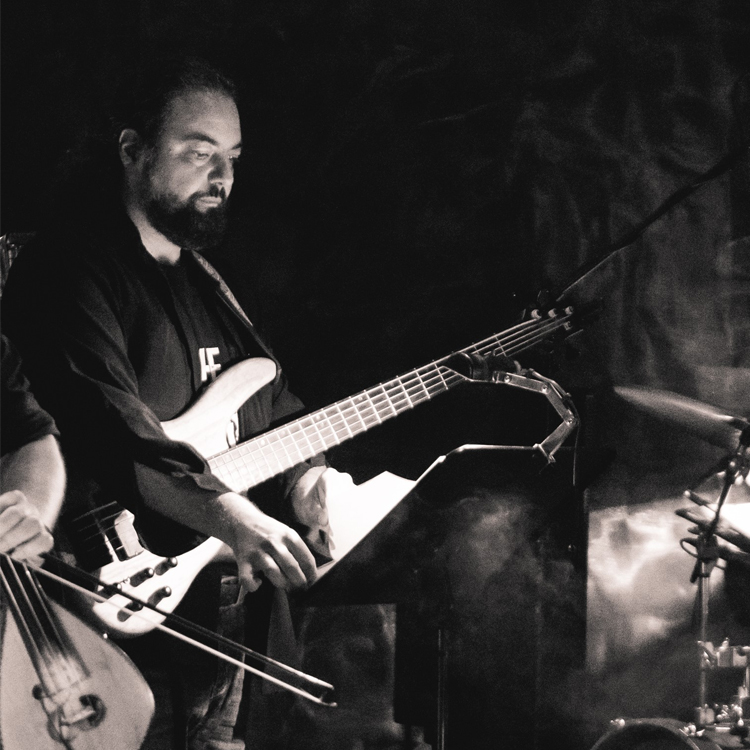 Michalis Mpoutsakis was born in Heraklion, Crete, in 1979. He is an electric bass performer, a guitarist, while during the period 1998 – 2004, he also studied at the TEI of Athens, Greece, School of Graphic Design and Art Studies, at the Department of Graphic Design. He also studied Sound Recording and Music Productions with Akis Golfidis (2002-2004). Michalis Mpoutsakis has collaborated as a sound-recording editor in numerous theatrical and music productions, concerts, nightclubs (2003-2016), as well as a graphic designer in a creative office (20042005). Since 2005, he owning and running the recording studio “ECHOTROPIO”. 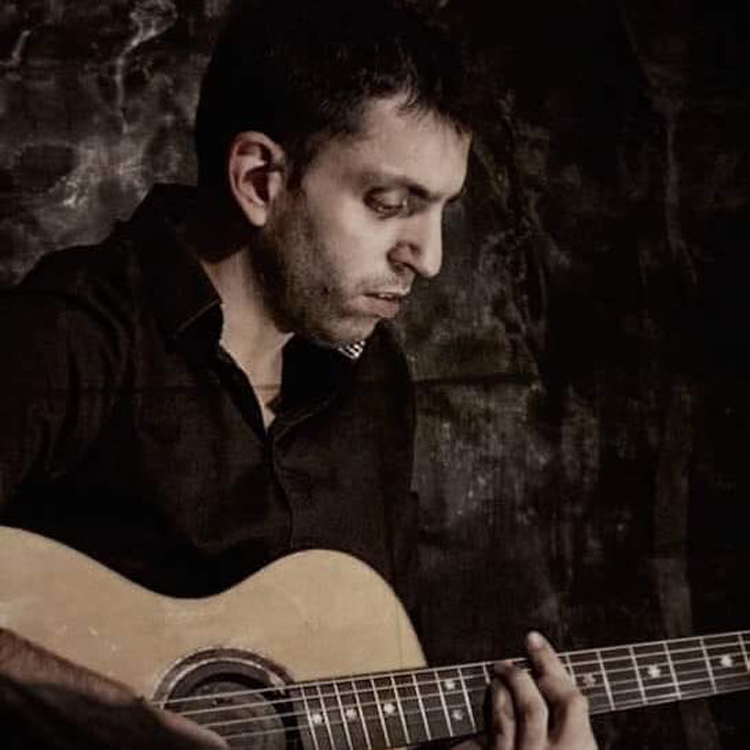 Michalis Daskalakis was born in Moires, Crete, in the winter of 1986. Holding a Degree in Civil Engineering (TEI, Heraklion, Greece), he started his music affiliation with the Cretan music tradition at the age of sixteen years old, studying the guitar. At the same time, he started playing music in public and ever since, Michalis Daskalakis has participated in several music bands playing in numerous concerts and festivals all around Crete, Greece and abroad. His collaborations in several Cretan musicians’s personal albums are multiple. He has collaborated with many gifted and well known musicians, such as Giorgos Nikiforou Zervakis, Manolis Spyridakis, Dimitris Spyridakis, Nikos Zoidakis, Vasilis Skoulas, Manolis Rasidakis and many others. 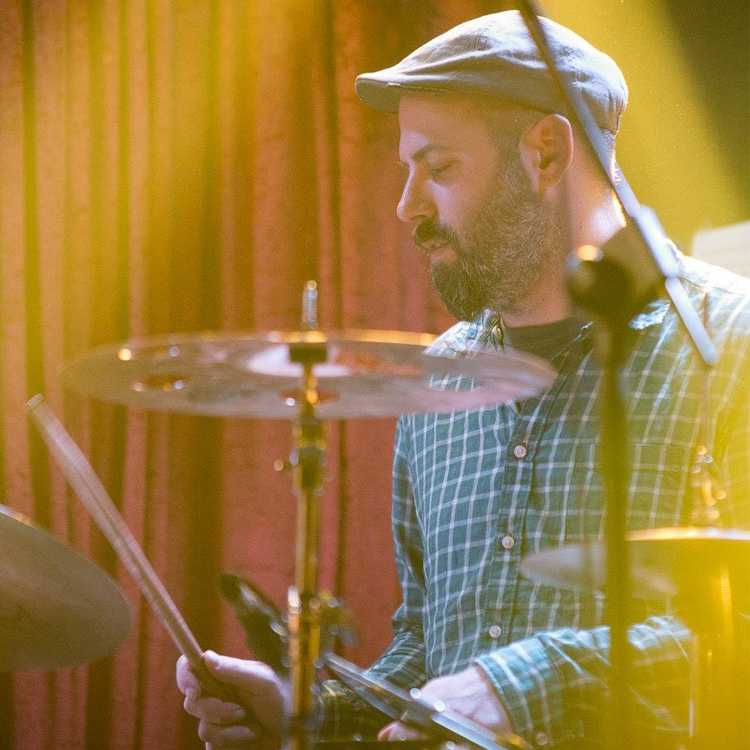 Nikolas Christopoulos was born in Boston, USA and grew up in Athens.

He began playing music at a very young age with various musical instruments. At the age of twelve years old, he began studying at the Experimental Music High School of Pallini, where he graduated in 1998, having attended classes of western and eastern-traditional music, having participated in many musical ensembles and choirs, and having been taught piano and tamboura by many notable teachers, as well as traditional percussion by Vangelis Karipis and Alekos Stamatelopoulos. At the same time, he is attending drums and latin-traditional-classical percussion classes, with Nikos Sidirokastritis, Nikos Kapilidis, Giorgos Metalinos, Nikos Karatzas, Vangelis Karipis and Dimitris Marinakis at the R.S.I, Polythythmia music school and the Athens Conservatory. In 2000, he completes his studies in music theory-harmony and obtains the diploma from the Conservatory of Nea Smyrni.

In 2003, he visits Madrid in Spain, where he attends 9 months of flamenco cajon and latin drums classes at Escuela De Musica Crietiva. While he is studying he also participates in musical ensembles and collaborates with famous flamenco dancers as a cajonist.

Since 1998, he has participated in many rock, jazz, ethnic bands, and he has collaborated in recordings and live performances in Greece and abroad with many famous artists.