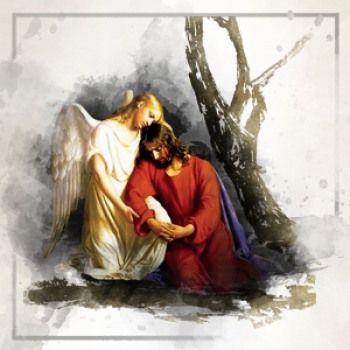 The Passion of the Godman provided both the thematic subject and the focal point where “our East” connects to the West as reflected in iconography, poetry, literature and music. Divine and human, the eternal love of the Soul to immortality; divine and humane, the pain of loss, the anguish, the supplication to Virgin, the expectation of Resurrection.

Byzantine hymns and troparia of the Holy Week meet the pre-classical dramatic ariettes composed by Allesandro Scarlatti (1660-1725), Allesandro Stradella (1642-1682) and Francesco Durante (1684–1755). From the sacred mysticism characterized one of the supreme Baroque oratorios, Georg Friedrich Händel’s (1685-1759) “Messiah” HWV 56, the expressiveness of Giovanni Battista Pergolesi’s (1710-1736) Stabat Mater P. 77, and the dramatic interpretation of the Divine Passion as imprinted at the works of Georges Bizet (1838-1875) and Pietro Mascagni (1863-1945), the “ascent of Holy Mount” thematic axis has marvelously inspired and ascribed to a vast group of  masterpieces in poetry and sacred music.

Ioulia Nikitina is a Russian soprano opera singer, who was born and raised in Saint-Petersburg, Russia. She started her first opera studies at a musical college (2001-2005). In 2012 she graduated from the Faculty of Vocal Studies and Directing of the Saint Petersburg Conservatory named after Nikolai A. Rimsky-Korsakov. At the Conservatory Theatre Ioulia performed the roles of Briggita (“Iolanta” by Pyotr Ilyich Tchaikovsky) and Susanna (“The Marriage of Figaro” by Wolfgang Amadeus Mozart).

During the period 2012-2014, Ioulia performed at the State Academic Capella of Saint Petersburg. Ioulia is a first degree laureate of Saint Petersburg Vocal Competition. In December 2019, she performed at the Christmas Opera Gala of the Municipal Art Gallery of Piraeus, Greece. In March 2020, she performed the role of Sophia, at the music theatre play “The Selfish Giant’’ in composition by Nikos Xanthoulis, conducting by Raphael Pylarinos and direction by Anna Papagiannaki Divani at the Cultural and Conference Center of Heraklion Crete. In August 2020, Ioulia performed for a classical music concert organized by the Municipality of Sitia for the “Kornaria’’ Summer Cultural Events.

Linda Athanasopoulou is a graduate lyrical mezzo-soprano, a student of Despina Kalafati. She graduated from the three-year educational programm for Τheater and Οpera at the Workshop of Spyros Evangelatos "Amphitheater for Acting", while she participated in movement, dance and performance classes at the "Vocal Art Workshop" of Spyros Sakkas and Natasa Zouka.

She worked for seven years a member of the professional choir of the Third Program of the Hellenic Radio, collaborating with choirs and orchestras. As a soloist, Linda participated in artistic events, recitals, poetry evenings, concerts, theatrical performances, while she is also a member of the Theatrical group of ELME Heraklion (THOKNI), Greece.

Linda Athanasopoulou works at the Music School of Heraklion, Crete, specialized in vocal studies and choir.

George Psaroudakis was born in Ierapetra, Crete. Following his call to music and particularly singing from a very young age, in parallel with his studies as a physicist at the University of Athens, Greece, George Psaroudakis studied Vocal Music, Classical Song, Choir and Byzantine Music at the Athens Conservatory and in other conservatories with top teachers.

In the early 1980s, he made his National Opera debut as Rodolfo in Giacomo Puccini's opera, “La bohème”, in which he won the warm applause of the audience and the critics as «the young-promising lirico/spinto tenor of Do of the Italian School». He later sung in Giuseppe Verdi's “La Traviata” as Alfredo and in other operas and large vocal works, such as Giuseppe Verdi's Requiem, Georg Friedrich Händel’s Messiah, Wolfgang Amadeus Mozart’s Requiem, Carl Orff’s Carmina Burana, Mikis Theodorakis’s (Axion Esti) as the singer, Giacomo Puccini's Messa da Gloria, Charles Gounod's Cecilia Messe et.al., while performing around Greece and Europe.

When he returned to his birthplace, Crete, George Psaroudakis taught singing at conservatories, music schools and choirs in Ierapetra, Heraklion and Rethymnon. He also found the Choir "Francisco Leontaritis" (Requiem Mozart, Toledo, Spain, Messiah Handel, MMTH etc.) at the University of Crete, where he taught singing from 1994 until 2008. At the same time, he won many awards, both as a soloist and as a choir conductor.

As a teacher, he taught at secondary schools, at the Higher Ecclesiastical Academy of Crete and at the University of Crete. He has several publications focused on the local history, as well as educational manuals for voice teaching.

The bass Manos Christofakakis was born in Heraklion, Crete in 1989. He graduated from Acropolis Conservatory in Athens in 2011, with Distinction and 1st Prize under the guidance of the tenor Zachos Terzakis. He has attended courses and masterclasses with Mária Temesi, Vladimir Chernov, Dimitri Kavrakos, Victoria Loukianetz, Noe Colin, Jesus Leon and Katerina Tsagaraki. In August 2020 he paticipated at Vienna Opera Academy with scholarship.

Among his recent performances are the title role at Mozart's Don Giovanni at Vienna Opera Festival (2020), the title role at Xanthoulis' children opera The Selfish Giant at the Cultural Conference Center of Heraklion (2020), Uberto at Pergolesi's La Serva Padrona (2019) produced by the Lyric Theater of Crete at Heraklion open-air festival, a recital with the French pianist Mélisande Sinsoulier at the international chamber music festival Casa dei Mezzo at Makrygialos in Crete (2019), the role of El Payador at Piazzolla's tango-operetta Maria de Buenos Aires (2017) by Marionetas.

He is the president and artistic director of the non-profit organization Lyric Theater of Crete and a lawyer. He graduated from Athens Law School of the National and Kapodistrian University. He continued with postgraduate studies in Athens Law School, at Frankfurt’s Institute for Law and Finance and at Columbia University in New York with scholarship.

Eugenia Psaroudaki studied at the Faculty of Philosophy of the University of Athens in the field of History and Archeology, specializing in ‘History of Art’. Coming from a musical family, she received a Degree and Diploma in piano (class Klelia Topaloglou), advanced theory and a degree in singing, with the grade "Excellent" and First prize (Alex Tournaissen).

She actively participates in the artistic life of her place with numerous concerts in Greece and abroad, while she has as an accompanist collaborated with most lyric artists of her city and of national Opera Gallery in recitals. She participated in the same role in the latest musical production of the Cultural Center of Heraklion “The Selfish Giant” by Nikos Xanthoulis (March 2020).

She has been a piano teacher at the Music School of Heraklion since 2008. She teaches piano in conservatories of the city, while she supervises educational programs of experiential connection of the history of music to children and young people.

Nikos Gigourtakis completed his professional career in Secondary Education, in the position of Director of Education of the Regional Unit of Heraklion, Greece. Previously, he taught as a philologist at the Music School of Heraklion and other General High Schools in the country.

He holds a postgraduate degree in Byzantine Archeology and he is completing his doctoral dissertation at the Department of History and Archeology of the University of Crete. His research interests as an archaeologist and historian include the Byzantine presence and the Arab occupation in Crete.

He is also the chairman of the Steering Committee of the Museum of Christian Art "St. Catherine of Sinai", located in the historic center of the city of Heraklion. The conclusions of the archaeological and historical research have been presented from time to time in scientific conferences inside and outside the country and his works are published in reputable scientific journals.