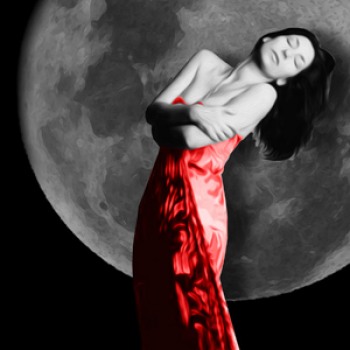 A musical performance dedicated to the moon.

The musical performance "FULL MOON" was presented for the first time in 2008 at the DIOMIDIO GARDEN OF THE UNIVERSITY OF ATHENS. Wherever it was presented, it was extremely well received, since due to its dreamy atmosphere and familiar melodies, it moves and drags the audience into a poetic, noble and deeply Greek world.
Texts and poems about the moon, written by writers and poets such as Papadiamantis, Cavafis, Solomos, Pappas, Lorca, Kamy, etc., songs by composers such as e.g. Theodorakis, Hadjidakis, Kounadis, Plessas but also folk poetry and songs, sung by Kerasia Samara. The stage is adorned with the simple embossed moon created by the painter Thanasis Panagiotou, winner of the World Painting Prize at the 2001 Biennale.

Kerasia Samara | Actress- Theatrologist- Director
She graduated with honor from the Department of Theatrology, University of Peloponnese. She graduated with honor from the Veaki Drama School in 1990. She graduated from the Three-Year Laboratory of Ancient Drama, sponsored by the EEC, of Lefteris Vogiatzis (1989-1992). She studied Biology at the University of Patras (1983-1987). During the 32 years of her professional career, she has collaborated with leading directors, has appeared in major theaters in Greece and Europe and has starred in great works of the world theatrical repertoire.
Indicatively, she collaborated with, among others: Yuri Lyubimov, director of the Taganka Theater in Moscow. She played Nina in Anton's. P. Chekhov play “The Gull”, under his own direction at the Dionysia Theater in Athens in 1994. Lefteris Vogiatzis was director of the New Stage. She collaborated with him for five years (1989-1993). She was a member of the ancient drama workshop in which he was artistic director, she played Ismene in Sophocles' “Antigone” (1992) and two roles (Annoussa and Armenissa) in Hortatzis' Katzourbo (1993) both directed by him. Rush Rehm was the artistic director of the Stanford Repertory Theater, where she played the role of Ekavi, in Euripides' “Ekavi”, 2018.
She played Roxy Hart in “Chicago” by Bob Foss and Fred Ebb in 1998 at the SMAROULA Theater under his own direction and choreography. Also, among others, with: Nikos Mastorakis, Giannis Houvardas, Grigoris Valtinos, Stamatis Fasoulis, Konstantinos Arvanitakis, Fokas Evangelinos, Giannis Iordanidis, Viktoras Ardittis, Sofia Spyratou and others. She has performed dozens of other leading roles in plays such as: Ekavi by Euripides (Ekavi), directed by Rush Rehm, STANFORD REPERTORY THEATER, Michalis Kakogiannis Foundation and Alcistis of Euripides (Alcistis), above the Arthur Miller Bridge (Beatrice). Others include: “Rose on the chest” of Tennessee Williams (Serafina), “Opera da tre soldi” by B. Brecht (Jenny), “The Night of the Iguana” by Tennessee Williams (Hannah),  “Slaves” of Jean Genet (Solange), Jean Cocteau's “Human voice” (monologue), “The Inspector Comes” of John Presley (Sybil), “Iphigenia in Taurus” (Iphigenia), “Antigone” (Antigone), and dozens of other roles.
She has collaborated with the National Opera (1998), three times with the Concert Hall (2000, 2017, 2018) and the Cultural Olympiad (2004). She has collaborated three times with the National Theater where she starred in the most brilliant production of the National Theater in the musical “Vira the Anchors” (Rosalia Kandili, 1998). She directed 16 plays, including Sophocles' “Antigone” and Euripides' “Iphigenia in Taurus” (2013).
Three of the musical performances she has created (Vrettakos-Lountemis talking, Phaedra and Bicycle License) were presented in Zurich, at the BOULEVARD, RIGIBLICK and VOLKHAUS theaters respectively, in collaboration with the cultural institution AKROTIEAMA, in December 2012, in December 2012. in Basel, Switzerland, at the SKULPTURHALLE MUSEUM, in collaboration with the cultural institution KULTURVEREIN DER FREUNDE GRIECHENLANDS, on 27 October 2017, as well as at the ART BASE, in Brussels, on 18 January 2019, in collaboration with  HELLENIC CIRCLE.
She has starred in the TV series (The Coffee of Joy, Tango for three, Shadows in the Peristyle, Crash) as well as in four movies (Drop in the Ocean, Testosterone, Beyond the Lake and In Time of Peace). From time to time she has collaborated with well-known Greek composers in concerts and discography. She works as a translator in the publishing houses GUTENBERG and MORAITIS PUBLICATIONS.
She was in charge of the Theatrical Department of the Municipality of Chaidari from 2015 to 2019. She taught Acting at the Veaki Drama School, at the New Greek Theater of George Armenis, at the University of Peloponnese, in seminars of the Ministry of Education, she also taught Ancient Drama at the National School of Art and Theatrical Writing at the Kakogiannis Foundation.

Vassilis Chatzinikolaou | Piano
Vassilis Hatzinikolaou was born in Thessaloniki.
He studied music theory and cello at the State Conservatory of Thessaloniki, Mathematics at the Aristotle University of Thessaloniki and Byzantine music at the "Ioannis o Damaskinos" school. He went on to study music at McGill University in Canada, where he earned degrees in composition, vocals, and choir conducting.
He became well-known to the Greek community from his 10 years of artistic activity in Hellenism there, but mainly from the release of the series of albums "BYZANTINE MUSIC IN THE NEW WORLD", which contain Byzantine music on English translated texts of orthodox hymnology with great resonance in English orthodox world of America. In Montreal, Canada he collaborated with the Greek community as head of the music department (choir and orchestra), director of the community conservatory, lead singer at St. John's Church and teacher at Greek schools there.
Since 1990, when he returned to Greece, he has collaborated with Dionysis Savvopoulos as pianist and orchestrator, as well as with other well-known names such as Loukianos Kilaidonis, Nikos Papazoglou, Orpheas Peridis, Giannis Miliokas, Melina Tanagri, Phivos Delivorias, Melina Aslanidou, Melina Kana, Katerina Kouka, Winter swimmers, etc.
He has taught music at McGill University, the College of Music in Thessaloniki and the American College of Athens (Pierce College). He was a collaborator of the radio of the "Piraeus Church" as a music curator and producer of the show "Invisible Passages".
His personal discography:
"Self-Defense", (1986, Greek music from Montreal, Canada)
"The Passerby" (1994 – Polygram), a production by Dionysis Savvopoulos
"Wine and Ainos", (2004, cd that accompanies the book of the same name by his brother)
"The blues of my soul", (2008 LYRA & reissue 2014 Melodic ship) Byzantine sounds in the 21st century
"Blues in oblique sound", (2012, Wine is dear), orthodox hearings in the 21st century
"Dreams and saints", (2015, Melodic ship), orthodox hearings in the 21st century as well as 8 digital records of English-language Byzantine music, with the general title "Byzantine music In the New World", released in America by Alexander Press.
He sings at the I. Church of the Ascension in Drafi (Penteli-Attica), and participates in music productions, recordings and concerts of well-known names of the Greek music scene.