Manolis Kontaros | Sweet the battle for love and for freedom 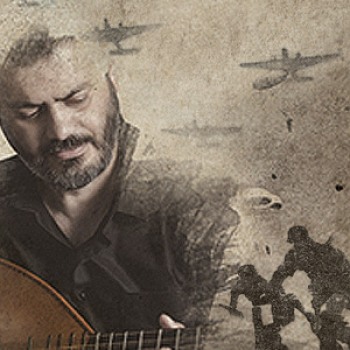 In the frame of the annual celebrations for the historical Battle of Crete (2o May 1941), Manolis Kontaros, a performer endowed with a revolutionary character and a Cretan soul, presents a program comprising selected songs in connection with the historical battle which took place at the Greek island of Crete during the Second World War.

Among the most charismatic and widely acclaimed Cretan musicians of his generation, Manolis Kontaros pays a tribute to both the historical event and the traditional music of his birthplace, transforming the arduousness of life into song and dance. In his first performance at the Cultural Conference Center of Heraklion, CCCC, Manolis Kontaros is ensembling by Michalis Georvasakis (Cretan lyra), Tasos Georgakakis (lute), Nikiforos Volanakis (winds) and Markos Georgakakis (guitar).

Night’s child
Lyrics by Manolis Kontaros on a traditional melody

Crete, my beautiful island
Music and lyrics by Giannis Markopoulos

Manolis Kontaros was born in 1968, June 14 in Brysses of Apokoronas, Chania, Crete.

He is the son of Ioannis Kontarakis (with origins form Tzitzife of Apokoronas) and Anna Makrydakis (originating from Fre of Apokoronas). Manolis Kontaros has three sisters; Maria, Georgia and Zacharinia. He is married to Athena Mavridakis and he is the father of four: Giannis, Anna, Iakovos and Eleni. Manolis Kontaros lives with his family Rethymnon, Crete.

The involvement of his with music started at the age of seventeen. Initially Manolis Kontaros was enrolled in Ross Daily’s music workshop in Chania, Crete, where he took the first lute lessons. Along with the music lessons, he also took dance lessons and he was the first dancer of the artistic group Apokoronas. Following the artistic pathway of Nikos Manias and Manolis Kaklis, Manolis Kontaros started his professional career in music with singing. Although none of the members of his family is acquainted with any musical instrument, Kontaros’s affiliation with the spirit of Cretan hospitality and the art of singing is strongly rooted to the origins of his family. His father, Kontarogiannis, is a thorough performer of rizitiko (a special genre of traditional solo unaccompanied song of Crete). Therefore, the first stimuli to music were derived from the musicians often gathering at the house of his family.

Of decisive influence to Manolis Kontaros’s musical aesthetics and the development of his career was his collaboration for 18 successive years with the late Georgios Tsouroupakis, a master of the Cretan lyra.

Manolis Kontaros has performed in numerous concerts both in Greece and abroad. Quite notable is the characteristic atmosphere evoked and created in every concert of Kontaros, inspired and comprised by traditional songs and music from Crete, the mesmerizing vocal power of rizitiko as well as of other Greek folksongs.