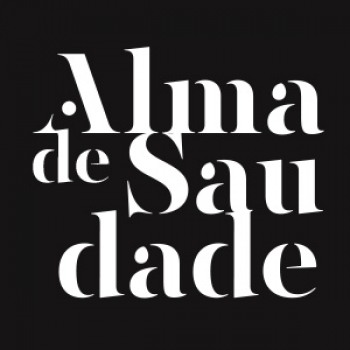 Australian mezzo soprano Lotte Betts Dean, Italian accordion and bandoneon performer Giancarlo Palena and Greek guitarist Dimitris Soukaras present, in their first appearance at the “Andreas and Maria Kalokairinou” Hall, a music program comprising some of the most lyrical songs of Latin America.

Βiographical notes of the performers 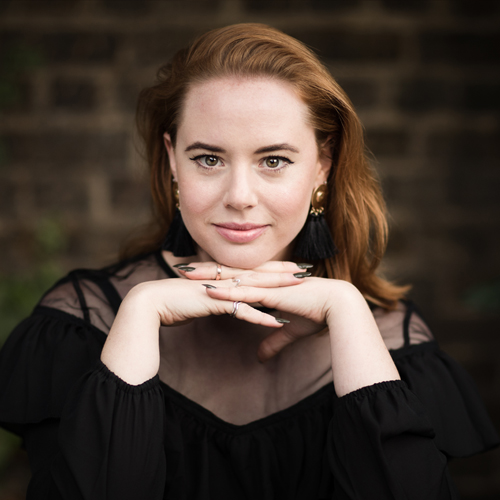 Australian mezzo soprano Lotte Betts-Dean is a versatile and dynamic concert artist, whose performance experience encompasses opera, oratorio, contemporary music, art song recital/chamber music, early music, et.al. She has been based in London since 2014 and works internationally, most often in the UK and Australia. Lotte is Associate Artist with Southbank Sinfonia, and is a member of London-based contemporary music group Ensemble x.y. She is also a City Music Foundation Artist for 2017-2019, recently won the 2019 Oxford Lieder Young Artist Platform, and was selected as a 2020 Samling Young Artist.

In Australia, she has performed at the Sydney Opera House, Melbourne’s Hamer Hall and Melbourne Recital Centre and has collaborated with many celebrated Australian ensembles and organisations including the Melbourne Symphony Orchestra (under Sir Andrew Davis) Australian Chamber Orchestra, Van Diemen’s Band, Rubiks Collective, Dots+Loops, Play On Music, The Song Company, and La Compania Renaissance Band. She has appeared at major Australian festivals including Dark Mofo, Adelaide Festival and the 2019 Australian Festival of Chamber Music.

Graduated with an MA (Distinction) from the Royal Academy of Music in 2016, where she studied with Catherine Benson and Audrey Hyland. While at RAM, Lotte performed regularly in chamber music and contemporary music events, was a member of the RAM Song Circle, and a soloist for the Kohn Foundation Bach Cantata Series. She performed in masterclasses with Sir Thomas Allen, Bengt Forsberg and Dame Felicity Lott and was supported by the Josephine Baker Trust. She received her BMus in 2012 from the Conservatorium of Music at Melbourne University and completed a Fellowship at the Australian National Academy of Music in 2014. Lotte has been a prize winner in several competitions, most recently winning the 2019 Oxford Lieder Young Artist Platform. She also won the 2018 inaugural Musicians Company New Elizabethan Award alongside Andrey Lebedev, and the 2017 Southbank Sinfonia Peter Hulsen Orchestral Song Award. 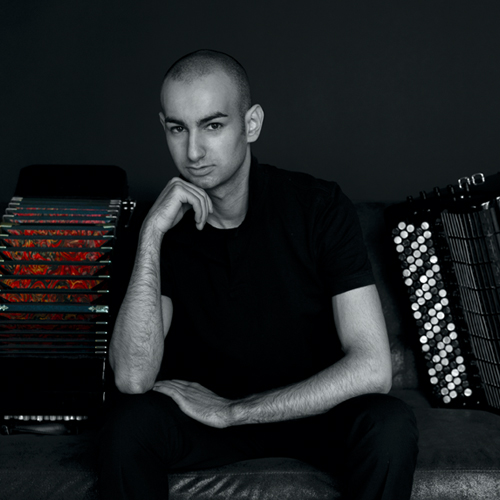 Giancarlo Palena, born in 1995, is a prize-winning Italian Accordion Player which started to study Accordion at the age of 7 with Mario Stefano Pietrodarchi.

In 2019 he graduated at the University of Music Frédéric Chopin in Warsaw, under the direction of Klaudiusz Baran. He has performed as a soloist and in heterogeneous chamber ensembles at important theaters and concert halls, including Royal Festival Hall and Royal Academy of Music in London, Teatro San Carlo of Naples, Academic Hall of the Fryderyk Chopin University of Music and the Royal Castle in Warsaw, Academic Hall of the Rome’s Conservatory Santa Cecilia, Vatican Museums, Italian Institutes of Culture in Istanbul, Dublin, Bucharest and Stockholm.

In 2019 he won the 5th edition of the prestigious The Arts Club - Sir Karl Jenkins Music Award in association with Classic FM 2019. To him is dedicated a piece written especially by Karl Jenkins, titled “Un chanson sans paroles d’un Film Noir”. Among the numerous prizes obtained in national and international music competitions, in 2015 he was selected as the best Italian candidate to represent Italy at the 68th CIA World Cup, held in Turku (Finland), obtaining the third prize. In June 2016 he received the Medal from the President of the Italian Chamber of Deputies in recognition of the musical talent and his achievements at international level.

He has held myriad concerts in Italy and abroad, performing in Austria, Belgium, England, Finland, Germany, Greece, Ireland, Malta, Poland, Portugal, Qatar, Romania, Serbia, Sweden, Switzerland and Turkey. In 2018 he was a guest of the London Philharmonic Orchestra as part of the Foyle Future Firsts Ensemble’s debut held in Southbank Centre, with music written in Theresienstadt concentration camp, by Viktor Ulmann (1898-1944). He attended many masterclasses of high musical improvement in Italy and abroad with Yuri Shishkin, Miljian Bieletic, Owen Murray, Geir Draugsvall, Cesare Chiacchiaretta and Voijin Vasovic. A versatile musician who extends his artistry over various musical genres, from baroque to contemporary, since few years he has also dedicated himself to the study of the bandoneón. 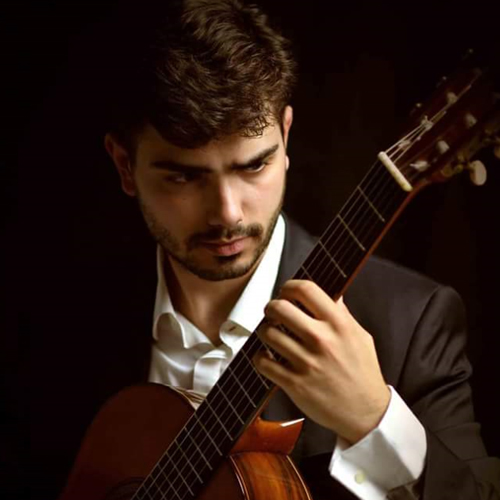 Dimitris Soukaras is a guitarist based in the United Kingdom. He is among the award-winning, promising Greek classical guitar performers of his generation. A Eurostring (2018-19) and a D'addario Artist, a Yeoman of Musicians Company and also, a winner of the Young Artists IGF Platform and a Fellow of the Stradivari Trust, Dimitris Soukaras has received 21 awards in international music competitions, among which is the First “David Russell” Guitar Award, the award from the International Guitar Competition “Mottola”, the "Ivor Mairants Guitar Award” and the award of music from the Athens Academy. He is the founder and the artistic director of the MUSA Concert Series, a music festival that takes place in Ancient Korinthos during August.

As a soloist, Dimitris Soukaras has performed in collaboration with the Audentia Ensemble, the Royal Academy of London Orchestra, the orchestra of the Ioanian University in Greece and the Athenean Mandolinata. Additionally, he has performed in numerous music festivals and guitar festivals in Greece and in Europe. Recently, Dimitris Soukaras has performed as soloist at the King’s Place – The Cultural Place of King’s Cross (London), the Musikverein (Wien), Cervantes Theatre (London), Megaron - The Athens Concert Hall, Third Programme of ERT.

In July 2019, was released his first personal album entitled «From Dawn to Dusk». Dimitris Soukaras is a PhD Candidate at the University of Surrey, focusing his research on “the role of the performer in composition of new works for guitar by non-guitarists composers”. His interest in contemporary music developed from a very early age, as he collaborated with composers such as Philippos Tsalahouris, Petros Klampanis and Iason Maroulis towards the creation of a new album with works composed by Greek composers writing music for the guitar for the first time (as a part of his studies of the Advanced Diploma at the Royal Academy of Music in London, 2019-20). Inspired by several music styles developed in Greece over the last years (from jazz influenced compositions to avant-garde music), the aforementioned album is to be released in 2021, comprising a solo guitar work, a song circle for mezzo soprano and guitar, two works for guitar and orchestra, and the concerto «Hommage» for guitar and string orchestra by the late Theodoros Antoniou. The artistic editing of the recordings for this album is by the conductor Miltos Logiadis.

Dimitris Soukaras studied classic guitar with Michael Lewin and Stephen Goss at the Royal Academy of Music, wherefrom he holds a Master of Arts with Distinction as well as a DipRAM for his exceptional performance quality. He is studying with the Fellowship by the Athena Scholarship, the Athens Academy and the Royal Academy. Supervised by Kostas Kotsiolis and Korina Vougiouka, he graduated from the Ionian University (BA in Music) and he was the first student to have fullfilled his academic studies in three years, instead of the regular 5-years tuition at the Ionian University, Greece.